Episode I – Secrets of the Skull Mine

After beating the crawler Samira seems not very happy. You can earn some affection with Charmer I again, but she will end up hitting you in your face.

You can later tell Khadra about it or decide to keep quiet. Should be obvious that Khadra likes the first option more and Samira the 2nd. After that you will have a brief meeting with the whole skull mine gang, including Valyrr Bavaeleth herself. Your task is to find some ancient relics of the past, so you better get right to it.

Since the Intro Episode is done, you won’t be guided around anymore. Most of the scenes are optional and you can choose to ignore a large part of them. Remember that. You actually have to talk to people to make some scenes happen! We start by having a quick look at the mining area: 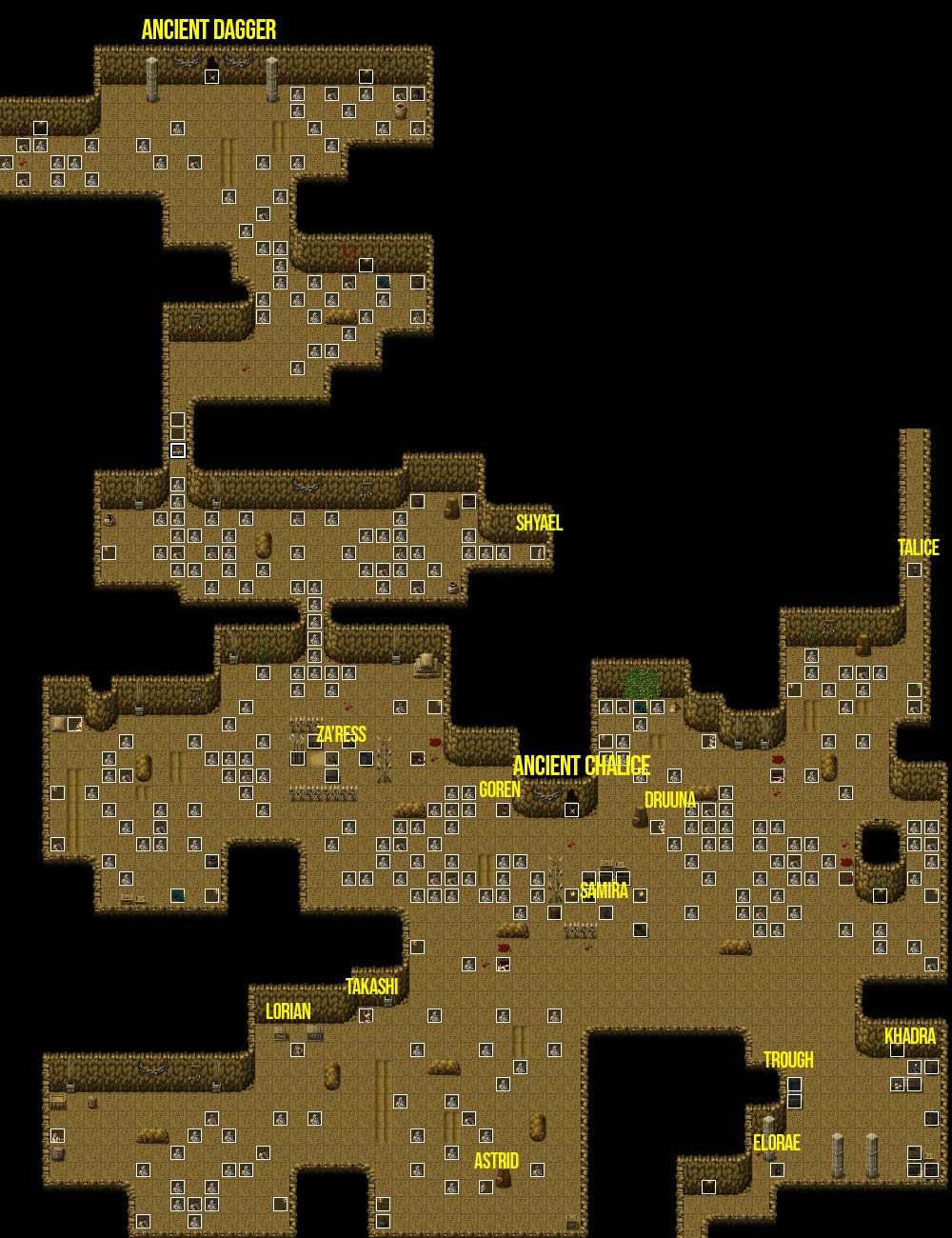 Yes…pretty large compared to your last area, but still pretty small overall. You can drink from the trough once per day in order to recover stamina!

You will encounter some random scenes you can not influence but only watch, like Astrid and Elorae sorting out their differences the Futa Dark Elf way. I won’t mention these since you will encounter them anyway and can’t do anything about it.

And now, to the other area, the prison district!

Looks pretty much the same as last episode, right? And will most likely continue to do so in future episodes. Because I’m lazy and stuff…and moving the prison district to another location doesn’t really make sense, storywise.

But at least you get a new inmate, because after the first encounter, a scene will introduce the barbarian Druuna to the game. From now on you can speak to her as well. In later episodes, she will even become your companion. So be nice to her!

And now, a bit more detailed! Your goal is up north! In the small cave you will find the ancient dagger. You will have to be at least level 4 to be strong enough to mine the rocks in front of that cave and you have to be at least level 5 to find the chalice later! Yes, that will most likely require you to do some mining and fighting, selling skulls, buying stuff and sleeping.

So, before you find that dagger, you can do some other stuff. For example:

Optional Scene: Get kicked in the nuts by Za’Ress in the mine (Level 1 Iron Skin Required)

Optional Scene: Get whipped in the mine by Samira (Level 1 Iron Skin Required)

Optional Scene: Get whipped in the mine by Samira (Level 1 Iron Skin Required)

Also optional: You can actually smuggle something past Elorae now: Arrowheads! You can give these arrowheads to Goren and if you give him enough, he will build something for you in return in the next episode! Keep that in mind.

After you had your fun, it is time to get that dagger. If you find the dagger, a cutscene will trigger. After that you can return to Khadra and get a reward for finding the dagger, or you can try to smuggle it past Elorae…which fails, of course.

After you have found the dagger and want some rest, Za’Ress will come for a visit in your cell…you can choose to not tell her the truth if you have the Iron Skin skill. It will have some impact on the game later on…

You now have to find the ancient chalice! It is easy to spot, a blinking light will guide you if the map above isn’t enough. You have to be at Level 5, as mentioned above! Another cutscene will trigger, and you can again get a reward from Khadra when delivering the ancient chalice! Before going for some well deserved sleep, Samira would like to have a word with you…

Optional Scene: Oral Worship with Talice in the mine (Level 2 Tongue Twirler Required)

Optional Scene: Oral Worship with Talice in the mine (Level 2 Tongue Twirler Required)

After you found the chalice and have slept again, take a long last look at this area and mine some more ore if you want. Because right back in the prison district Elorae will tell you that the Matron Mother wants to talk to you. Go speak with Elorae and go to the Chambers to end Episode 1! Congratulations!

Facts: Druuna was planned much later for the game. But with giving my Patreon Supporters the ability to choose which character should be available next, I had to bring 3 contestants to vote for. I was certain that people would vote for a giant wicked spiderwoman that I also made. Needless to say that Druuna won by a landslide and the spiderwoman came in last. Shows how well I know my kinky audience. I guess one giant spider is enough in one game.