After having a brief meeting with the Matron Mother (and choosing if you want to test her patience or not) Elorae will bring you back into your cell.

Optional Scene: Elorae fucks you if you behaved in front of Valyrr (Level 2 Endurance Required)

Now, whether you had some action with Elorae or not, the next morning Talice will always wake you up to take you with her and Khadra to find the gate. Finding that is pretty easy, just walk along the pathway. Once you found the gate, cross the bridge, fall, watch two extended cutscenes and then get back to what you do best…mining!

Note: You will lose your inventory and skulls when you fall from that bridge and get robbed by goblins! 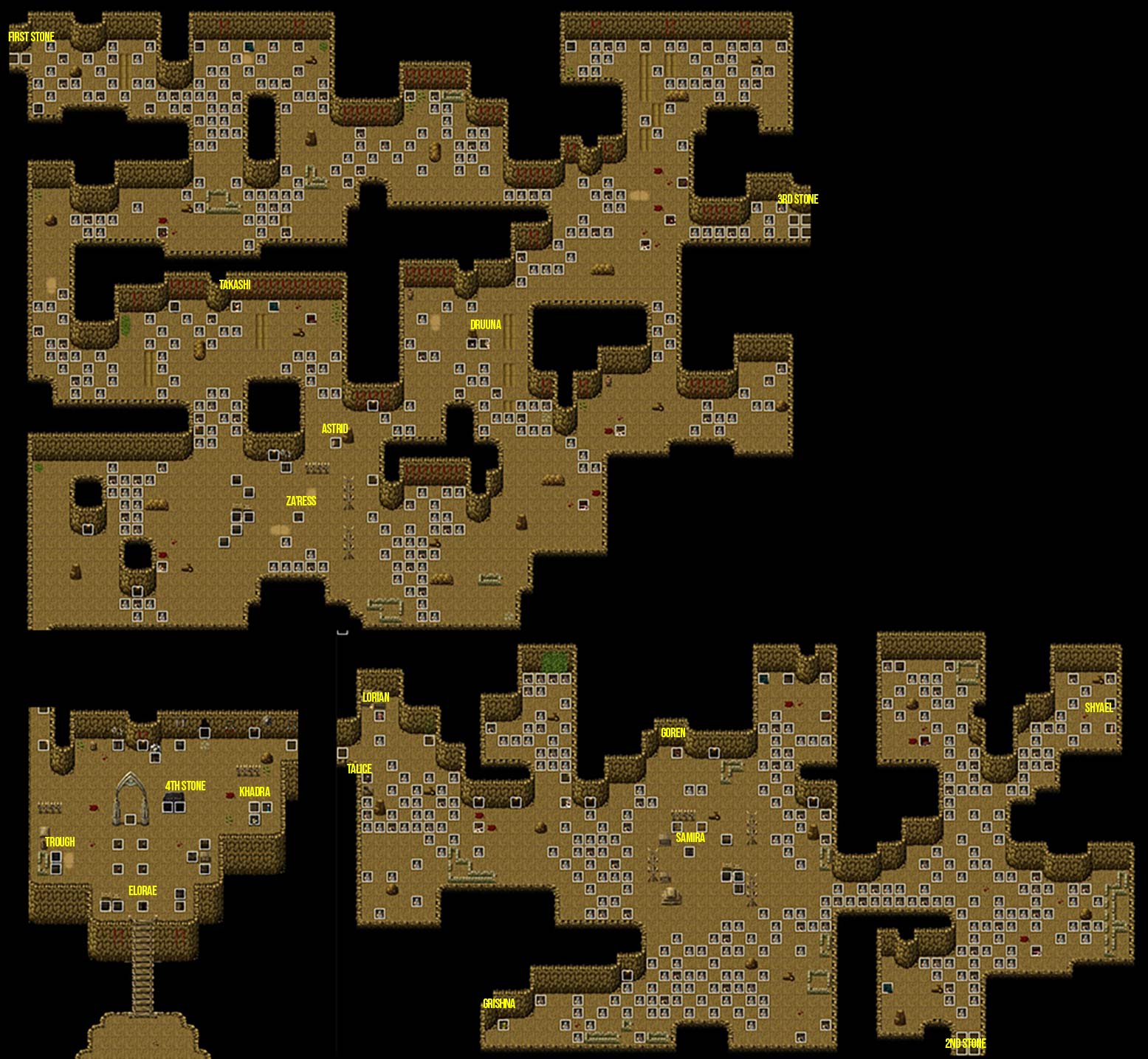 This time the area is pretty big, but you can handle it! You’re having a rough start since you just lost your stuff. My best advice for an easy start is an early conversation with Lorian, who instantly gives you 2 health potions! What a good guy! 🙂

You can recruit Druuna now as your companion. Druuna will ask for 15 skulls in return and also she isn’t a fan of the small caves where the stones are, so she won’t go in there with you. Also, you can’t really speak with anyone once she’s in your team…because she will speak with everyone instead of you :D. Speaking of the stones, that is your task in this episode. Find and touch all 4 of them. They will be glowing one after the other. Just do what Arachna asks you to do in your dreams.

And yes, you need to sleep first in order to make these stones glow again. That is why a lot of cheaters failed miserably in this episode…mining all ore there is with their infinite health and stamina and then wondering why there is nothing going on!

And now, a bit more detailed! Touching the stones will drain health and stamina because Arachna is sucking energy right out of your body. Make sure you either have some food and water ready or just don’t do more mining afterwards.

Some of the optional scenes will require the highest level of the skills, as well as some story encounters. It is meant to be that you do not have all of them and have to choose at this point! If you want to be an allrounder, you can get everything up to Level 2 and maybe one already up to level 3. You want to please Futanari? Tongue Twirler III and Endurance III would be an excellent choice! Want to please the most sadistic dark elves? Go with Iron Skin III and Endurance III. Want to have all the dialogue options? Charmer III is it for you. Take what you think is best.

There are of course a lot of optional scenes to see, some of them are available right from the start, for others you might have to touch the stones first:

Also optional: Talice will teach you one of her combat skills if you are already Level 10, Lorian will continue to give you “Black Honey” in return for Nightshade and Goren will finally finish a tool for you if you have given him enough arrowheads.

With that tool you can loosen up the back wall of your cell. It will take about 6 days of constant use of that tool and afterwards you will need something else that you cannot get your hands on in that episode!

So you see, there is actually a lot to miss if you rush through, so take your time! Now let us go on with the scenes that are not optional, and I will try to be a bit more detailed with the walkthrough, although it’s really easy:

After you go back to the prison district for the first time, Khadra will drag you into the torture chamber

After you encountered Khadra for the first time and get another vision of Arachna, the first stone will start to glow. You can touch it now and give Arachna your energy. The lights near the portal will begin to glow if you have touched one of the stones, that way you can see how many stones you have touched and how many you have left. Having touched the first stone, on the way back to the cells a cutscene with the other slaves will trigger.

After touching the 2nd stone Samira would like to have a word with you! Due to previous failure she’s been training a lot and is actually quite good with the whip now. That means you cannot avoid gettin’ hit by her. Only charmer works to get some affection…

You’ve almost done it, touch one more stone, number 3, and return to the cell district to get a torture scene with Talice, who finally reveals the ‘Annihilator’

After surviving that encounter you’ve made it again. Congratz!

The fourth and final stone will glow now! You can touch it and trigger the ending of this episode or decide to stay a bit longer, mining ore and level up! You might want to earn yourself some skulls. But then again, maybe you’ll just get robbed like in this episode. Mmmh…decisions, decisions!

Then I posted a preview picture of the goblins. And some people thought instead of robbing you, they would engage in some gay goblin action with you (I might have purposely added to this confusion). Some Patreon Supporters where against any gay scenes and expressed that. The “gay” tag seems to be where a lot of people draw the line, even if it is optional, even if it is in a game like this. I mean, until now you don’t have to deal with any futanari content. Yes, the futanari are in this game, they might flash their dicks here and there, but you do only have to talk to them once in a while, they never force themselves onto you. You can ignore them for the most part. I try to do that in all my recent games. So that people who are turned off by futanari content can still enjoy the game! But it’s no option to exclude futanari content! Never ever!

Now, we do have some male npc’s in the game as well! So even if right now there is not any gay scenes in this game, optional gay scenes might come…most likely for the ending, though…which is a bit far away at the moment. It also got me thinking that if the player, who is supposed to be a slave in this scenario, can choose everything that happens to him, is he really a slave? Or is he the secret king of the skull mine?