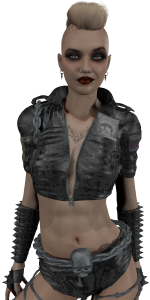 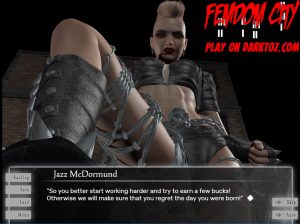 As a sadist, Jazz usually physically dominates and bullies you. She loves to see you squirm and can often be found at the underpass, where she makes slaves clean her spiked boots with their tongue. She also has no respect for the authorities, which is part of the reason why she will protect you when you’re at downtown in her territory. But only if you can afford to pay for her protection, otherwise her motivation to fight the cops for a male is rather low. While she’s a sadist and loves to physically overpower men, she doesn’t really do it without a connection to the victim. If you want her to dominate you, or even just protect you, then you better spend some time around her and do what she says, because otherwise Jazz McDormund will most likely not care about you at all!

She can be found in front of ‘The Camp’, guarding the entrance. If you want to enter the camp, make sure to pay Jazz, the sadist, 10$. Otherwise she won’t let you in. Once you paid, you can move in and out of the camp until you slept in your cardboard box. You have to pay her again the next day if you want to re-enter the camp.